The neighbourhood is still there. Always on the verge of overflowing (or did it overflow and we don't recognise it?). It's just around the corner. At the end of that street. Surrounding a housing estate. Behind the motorway. Sometimes, very rarely, the neighbourhood is hidden, tucked into a crack in the city. But it is almost always in sight, like a great façade, a wall. The steep stairs announce it. The rubbish at the entrance labels it. And the gateway - which simulates recognition - separates it. Why place a gateway to the neighbourhood if not to emphasise the separation, the rupture, as if it were the threshold to something other than "the city"?

Can you imagine a portal between Los Chaguaramos and Santa Mónica, between Las Mercedes and Chuao, between Altamira and Los Palos Grandes, between barrio and barrio, between Julián Blanco and José Félix Ribas? Unthinkable. But it does appear between Boleíta and La Lucha. Between Los Chorros and Agua de Maíz. Between Bello Campo and La Cruz. Between Alto Hatillo and El Calvario. Between the town of Baruta and La Palomera. What if instead of a gateway there were an open access, without accumulated rubbish. What would happen if that gateway - with its eternal rubbish dump - were moved one or two blocks into the town centre, into the urbanisation?

The neighbourhood is not informal, but it is not formal either. A "housing estate", an "industrial zone", a "shopping centre", are not necessarily formal, sometimes they are not even well planned. How much "informality" exists in all sectors of the city, understood as the absence of a plan or disregard for the simple norm? From the language (from the intention manifested in words), differentiated public policies are constructed: some are a little more formal - structural, regular - for the "formal sectors", others are quite "informal" - assistance, sporadic - for the "informal sectors".

The first transformation - the first overflow - of the city must take place in the field of discourse. A rupture that signals our cohabitation in the same city. Cohabitation that, in symbolic terms, translates into coexistence. The city of recognition. If we are all inhabitants of the same city (a diverse but complete city), and we have the same citizen rights and the same right to it, that segment of the city called barrio, where more than half of the inhabitants of Caracas live, will demand responses that are not sporadic, not assistance-based, but systematic, organic. It will demand public policies, not operations, missions. It will demand formality from a state that finds it so hard to keep its word.

What, then, does the neighbourhood need? Recognition. It needs recognition, from inside and outside, as part of the city. The neighbourhood - in a hypothetical and desired democratic city -demands respect. Let us change the question: what, then, does this archipelago of fragmented territories that we inhabit need in order to be a city? Recognition, respect. Continuing to think of the neighbourhood as an urban malaise does not help us to understand it as an active part of the city, as a space that can be walked through - lived in - by all.

Do we want to integrate the city? Let us not even think, then, of "neighbourhood-city integration", because in itself, in terms of language, we would be starting again from the political error that the neighbourhood is not the city. Let's go beyond pigeonholing: what we consider "city" today is not and never will be without the neighbourhood! Let's come together. Let's do it from the word, but, above all, let's do it from our last and most definitive frontier: from the body. Word made flesh and blood. Word that walks. Bodies that celebrate because they live together. Confluence and hospitality.

Public space is, not because of the design of the space itself (delimited, orthogonal, with walkways and green patches, with fountains and busts), but because of the social dynamic that is generated in a space - designed or not - and that ends up defining the place. But in this battle to order and make the territory legible (rather than to integrate and converge), we tend not to recognise the existence of these places. It is time to open our eyes and our minds. To let desire flow, to play with friction and error. To dream from the other experience. To put together a catalogue of other spaces, other possibilities, other opportunities that transcend the machine city of homo faber.

The verticality, the crossroads of staircases, the contiguity of façades, the exposed, open, touching, touching, building spaces and gazes that fall like waterfalls, the cracks and gaps that offer cut-outs of the city. It is time to recognise, in this capillary weave of the neighbourhood, other typologies of spaces that are useful for meeting. Useful for contemplation. Useful for play, in there. But also useful for imagining and constructing the city of homo ludens. Exportable neighbourhood spaces? Overflowing and connecting the living experience of the neighbourhood outside it could also be a form of recognition. A clear and forceful way of saying that we have advanced, that we have learned, that we are walking the path of integration.

To immerse ourselves in this landscape (today, here in La Palomera), to make its mixture a continuous experience, perceiving the changes of scale. The emergence of new forms of tradition, urban, mutant. City as metaphor to liberate collective desires. The capacity to dream as a catalyst for the creative will and the necessary, liberating encounter. Art, pedagogy and the city as a decisive interweaving. Immersed in the experience of this urban nature. Immersed in the desire of the other to inhabit the city that I also inhabit. A sensual, sensitive city, permanently open to otherness. To dream it, it is necessary to put in suspense and overflow the hierarchical and disciplinary conceptions of the city. Can we, from art, configure an alphabet to think this city of re-knowledge? To plant ourselves from a new language in order to exist by inhabiting the body, the house, the landscape, inhabiting the city.

It is time to open our ears and pores to dialogue. Letting go of the body. Walk to celebrate diversity. The whole city. 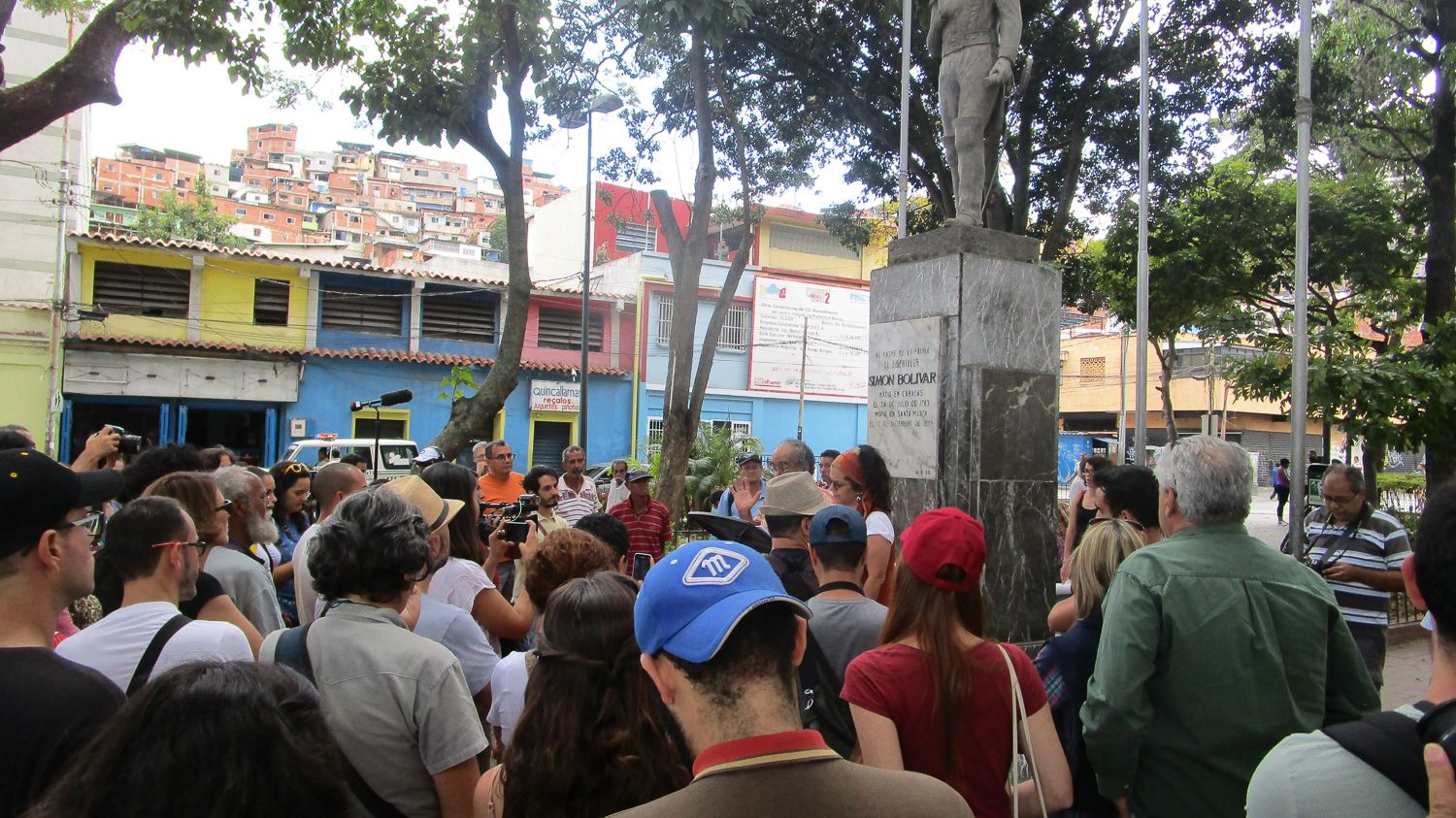 Reading of the Manifesto in Bolivar Square 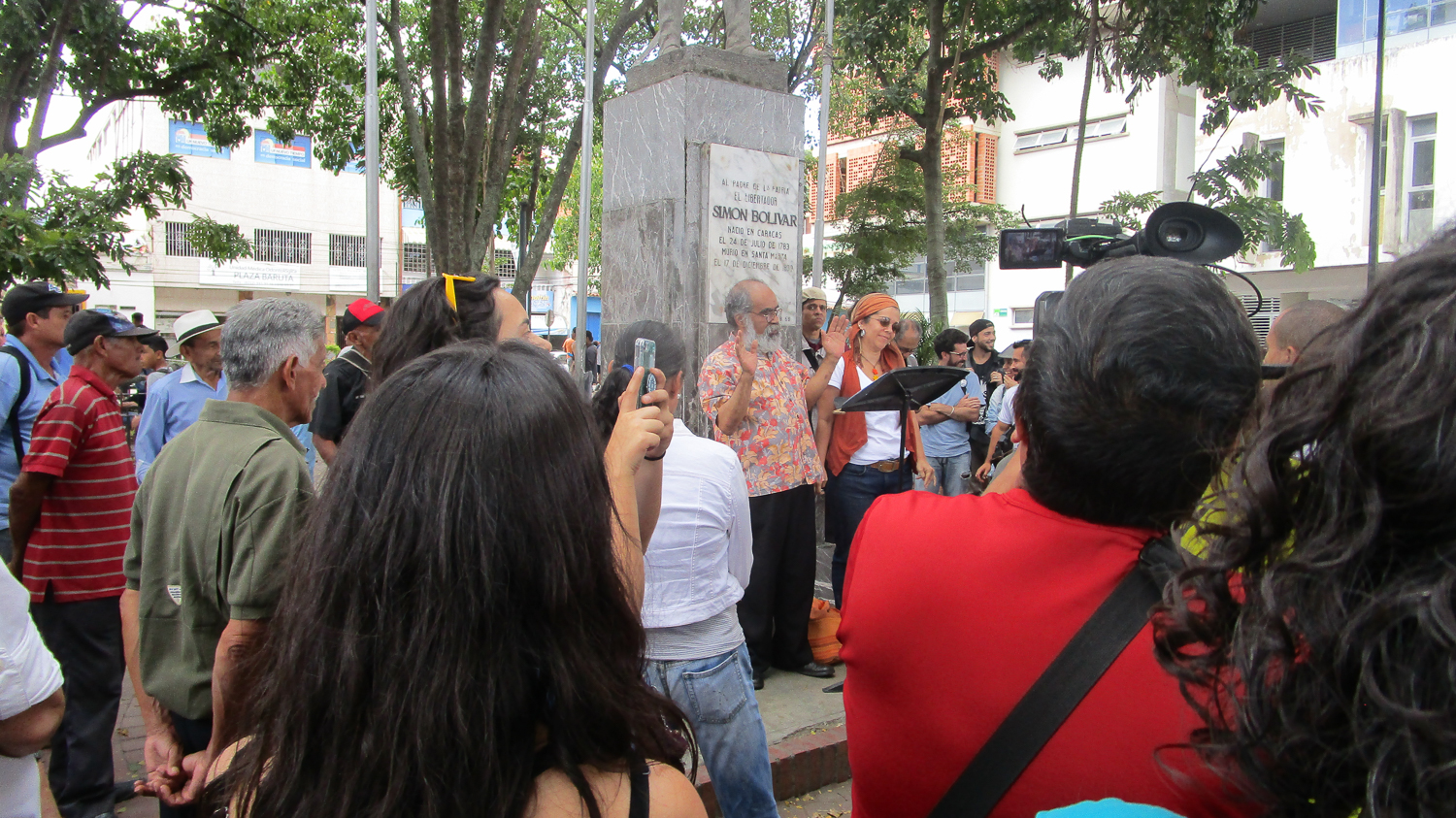